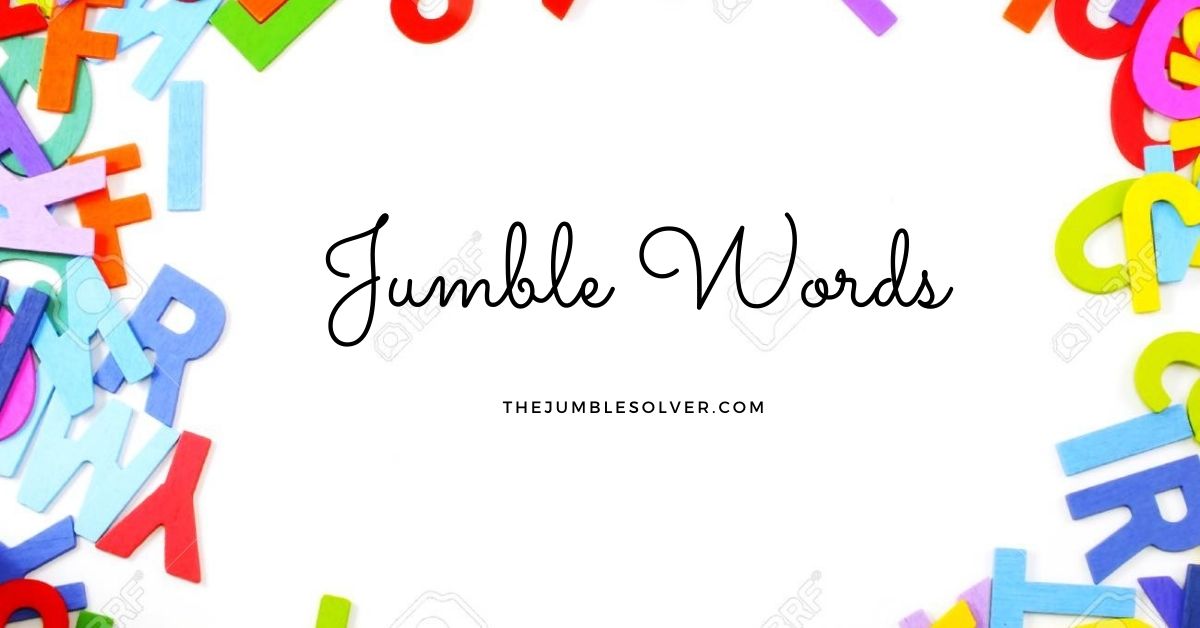 A word puzzle with a provided clue is called Jumble. Sometimes it can be a drawing that illustrates a clue, or sometimes a set of jumbled words that are scrambled by their letters. Basically, these jumble words created by scrambling the letters of a word and it becomes a puzzle for you. You have to rearrange those letters according to the given clue.

What are Jumble Words?

To be very simple there is no difficulty in understanding these words. All you need to have a focus on the knowledge that we are sharing with you. We’ve already told you above that these are just scrambled letters that need to be rearranged according to the given clues. We can give you examples of jumble words so you can better understand the science behind word puzzles.

There is a solver that you can use for unscrambling those scrambled letters to make a new meaningful word. This solver will reconstruct the words using the letters you provide to it, then it arranges the letters at their marked position which makes it easy to spell the answer according to the given clue. Those clues and illustrations always provide hints about the answers.

These are the four examples of jumble words. You can see that their letters are scrambled, and you just need to rearrange them to make a meaningful word. There will be a clue or illustration will be provided to you in these types of puzzles to make things easy for you. So you will be unscrambling these words according to your clue to get an actual answer and earn some points.

Jumble was created by a famous book writer Martin Naydel. He was better known for his writing work about comic books. He did this magic in 1954 and created some puzzles. In the start, it originally appeared with the title “Scramble”. As we said above, what are these words, and how they were created? Now it is very much cleared from the history title.
Let’s just continue to the further history.

The responsibility of jumble or creating puzzles like that was then taken by other beautiful writers Henri Arnold and Bob lee. They took over this magically created feature in 1962. Henri Arnold has written some books on this. Some of his famous books are Jumble, The scrambled word game, and Jumble book. Both of them have done this exceptional work for thirty long years.

After 2013, the Jumble was maintained by the American game and puzzle inventor David L. Hoyt. As you may know that the Jumble is a valuable and authorized property of its distributor. The company that owns the JUMBLE trademarks and copyrights is a US-based name as Tribune Content Agency. There are now daily and Sunday Jumble puzzles appearing in more than 600 newspapers in the United States.

Where can you find Jumble Now?

Currently, the associated version of the jumble that you found in most of the daily newspapers comes with four base anagrams, two of them have five letters and the other two have six. These puzzles come with a clue or illustration. Sometimes there is a series of blank spaces in which the answer of clue fits and we have an understandable word.

There is also a kid’s version that appears weekly in most of the newspapers. This puzzle features four scramble words in which one is a three-letter word, and the other three are four-letter words. There will be a clue given to find the answer. The player needs to unscramble all four words. The circled letters are the clue there, but you need to unscramble circled letters too so you can have the last answer.

Moreover, the Jumble brand has provided many variations of puzzles. We can also tell you about some of these exceptional variations. Jumble, Jumble for Kids, Hollywood Jumble, TV Jumble, Jumble Jong, and Jumble BrainBusters. These are some very liked and followed puzzles in the United States and internationally.

Where Can You Play Daily Jumble Puzzle?

Most of the regular fans already know where they can play daily Jumble. There are many apps also available on the google play store that offers a Jumble puzzle. These platforms are from the online market so you can play during your office break time. But this game needs your real attention to have accurate and quick results. We’re talking about quick results because there is a timer that wants you to solve as quickly as you can.

Moreover, the daily Jumble Puzzle also available in the offline market. You can found it in daily newspapers too. Many newspapers in the US have a separate section for this puzzle. They update it with the daily coming newspaper. So you can enjoy this with morning tea while you do your reading of the news. This can be very useful as you can solve it with the help of your family members.